With winter still hanging on, what better time to add some heated tile to your bathroom floor. Make getting out of your bath or shower that much more comfortable.  END_OF_DOCUMENT_TOKEN_TO_BE_REPLACED

Size, height and function all play a role in selecting a toilet for your new bathroom. These tips will help you find the right commode for your family.

END_OF_DOCUMENT_TOKEN_TO_BE_REPLACED

It can be easy to overlook the bathroom. It’s a functional space first and foremost, and unless you like long hot soaks in the bath, you probably don’t spend a whole lot of time in there. But that is no reason to neglect it. So here are some simple but effective ideas for perking up a tired bathroom without ripping the whole thing out and starting over.

END_OF_DOCUMENT_TOKEN_TO_BE_REPLACED

In the run up to the German bathroom tradeshow, ISH 2015, the Association of the German Sanitation Industry is using its Pop Up My Bathroom trend forum to address designing for different stages of life.

END_OF_DOCUMENT_TOKEN_TO_BE_REPLACED

Do you often find yourself worrying about the stress of your day while you shower? Do you find yourself listing all of the things that have to be done, and the things that didn’t go as planned as the water falls all around you? Maybe it’s time for a different shower experience. With Hansgrohe, your daily shower can be the most relaxing part of your day.

END_OF_DOCUMENT_TOKEN_TO_BE_REPLACED

New mirrors are a great way to change a fundamental part of your bathroom. Other than utility, mirrors can also make a room seem larger, which is great if you live in a small apartment or condo. However, how these things are attached to the wall eludes most people, and since they’re very delicate and heavy, it’s mandatory to do it right the first time. That being said, it’s very possible to do it yourself, so let’s get down to it.

END_OF_DOCUMENT_TOKEN_TO_BE_REPLACED

Suddenly, the Christmas decorations are out and we are on our way to some brutally cold weather. What could be better than a heated seat in your car as the icy temperatures approach? Heated tile floor. It is easy to install, cheap to operate, and it won’t take up any extra space! Plus, your feet will love you for it. The concept of in-heat flooring is pretty simple. While installing new tile, a mat with a continuous heating element woven in, will be placed in the mortar underneath the tile, taking that icy chill right out. END_OF_DOCUMENT_TOKEN_TO_BE_REPLACED

Homeowners have many important questions about their Bathroom Remodeling Project. How much will it cost? How long will it take? What problem areas do I need to watch out for? Can I recover my Bathroom Remodeling investment when I sell? Can I do some of the work myself? What can I do to make sure that the work is done right? Give your bathroom design a boost with a little planning and a few bathroom ideas. Whether you’re looking for bathroom remodeling ideas or bathroom pictures to help you update your old one, start here!

Use this information to develop a budget, bid requirements, hiring contracts and a project plan and to understand your options, make good decisions and get quality work at a fair price. END_OF_DOCUMENT_TOKEN_TO_BE_REPLACED 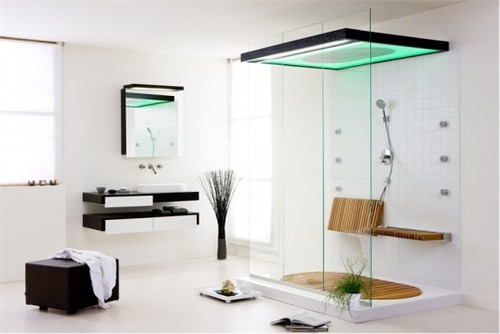 When it comes to home re-designs, the bathroom and the kitchen rank at the top of the list as most important rooms in the home. Considering how busy the bathroom can be, it’s a great idea to keep the look of this room up-to-date. Some homeowners are stumped when it comes to what looks good and what is in style. That is why it is very important to keep up-to-date on popular style trends and keep them in mind while picking out a new design. END_OF_DOCUMENT_TOKEN_TO_BE_REPLACED

Plumbtile President, Clive Moch, was one of a group of top American, Canadian and Australian retailers invited to the ISH Convention in Frankfurt Germany in mid March. The invited delegates were also treated to tours of the KWC manufacturing facilities in Lucerne Switzerland and Hansa’s head office in Stuttgart Germany.

Clive reports the Excursion was a “… truly awesome” experience. “At the ISH convention and trade-show, I saw all the major brands, each with an extraordinary display and presentation. The energy and floor traffic at the trade-show was amazing, as was the energy in the conference rooms.”

ISH is the world’s largest annual bathroom and plumbing design conference. The conference reports a staggering figure of 204,000 attendees over the five day event. The conference and trade-show offers delegates a view of the near-term future of bath and plumbing design. Products displayed in trade-show booths or discussed in conference rooms this year will be on the Plumbtile website and retailers store shelves next year. Clive is extremely excited about new product lines and designs being developed by manufacturers.

“I saw a number of great new products in Frankfurt,” Clive said. “New product lines will be very contemporary. One example is a move towards incorporating electronics in home bathroom design such as electronic touch button faucets in chrome finishes.”

Another concept Clive came across at ISH was the new trend towards modular design. In future installations, every component will line-up exactly with a grid pattern used to create unique or individual designs. “This will prove to bring great cost savings to our customers in the long run”, Clive said.

When asked what his greatest impression of ISH2011 was, Clive said, “Faucets are definitely going to be more sophisticated. More electronics will be used. The Europeans love chrome finish, it lends itself to contemporary simplicity. Home design is going the way of commercial buildings, eco-friendly and hands free.”

The ISH conference was the first leg of the Real European Excursion. After the conference concluded, the group was taken to Lucerne Switzerland to visit KWC’s production center and meet KWC Chairman Roland Gloor. Mr. Gloor gave a tour of the production facilities before introducing KWC’s head designer, Michael Lammel, who facilitated a discussion of KWC’s new design process.

Leaving Lucerne, the group traveled back to Germany to visit the Hansa head offices in Stuttgart where they met Hansa’s lead designer Richard Zetsche. Mr. Zetsche took the tour to the Benz museum to introduce Bruno Succo, formerly head of design for Mercedes Benz, now head of faucet design for Hansa.

At Hansa, the group discussed the design and production process and was given a glimpse as to how Hansa develops new products. Clive reported hearing of a group of design engineers watching dozens of videos of dolphins as a creative exercise. Glancing over at a set of Hansa faucets, Clive can now see those dolphins reflected in the trim chrome lines of the products.

Returning from Europe, Clive was even more passionate about the products we sell than he usually is. “It’s not just a faucet”, he said emphatically. “You can’t just take these products for granted. They are art objects, pieces of designer art in one’s home.”